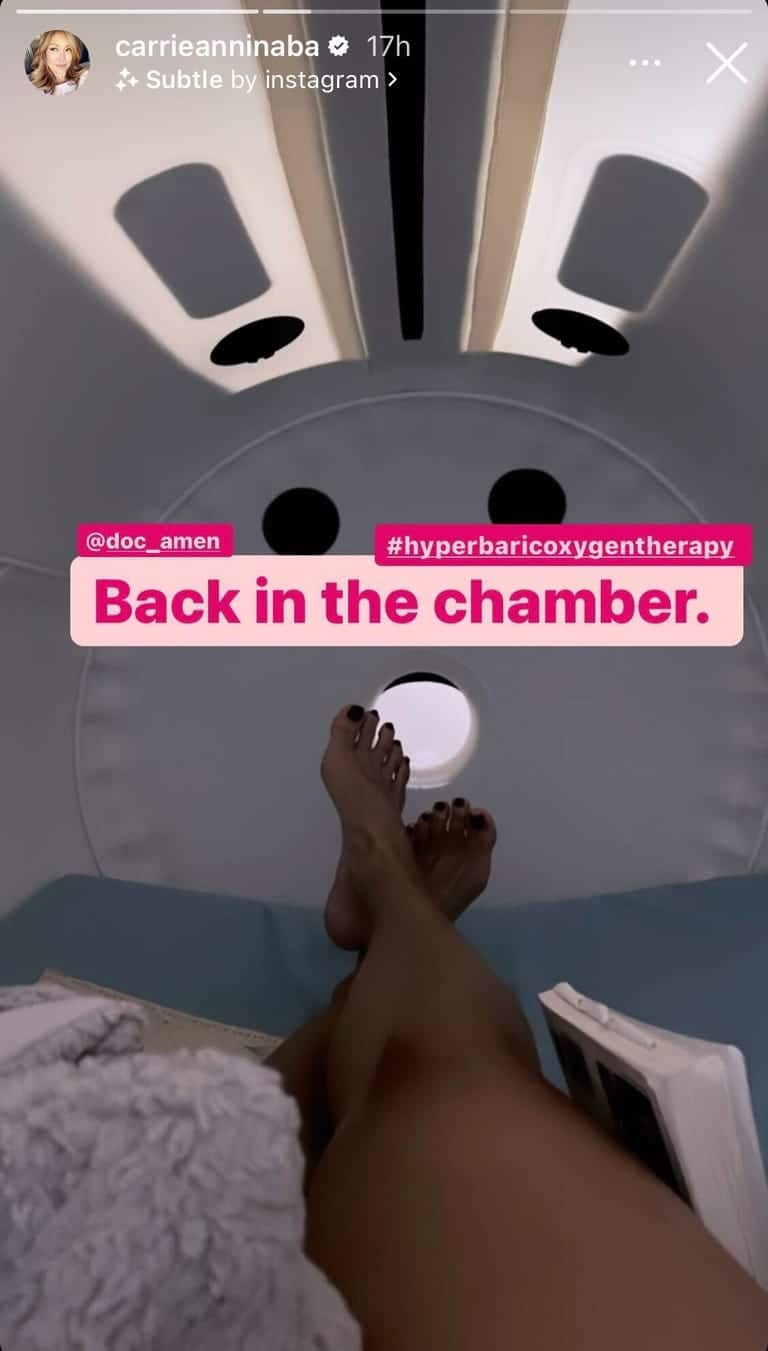 For more than a year now, Carrie Ann Inaba has embraced her ongoing health journey. Recently, she shared the latest with fans in a subtle but telling post.

On May 2, the Dancing With the Stars judge posted a photo on her Instagram Story of herself laying down in a hyperbaric oxygen therapy chamber. According to Mayo Clinic, the medical device allows a person to breath in “pure oxygen in a pressurized environment” where “the air pressure is increased two to three times higher.” Several medical conditions like severe anemia, decompression sickness and burns are treated with hyperbaric oxygen therapy, which aims to promote healing within the body.

“Back in the chamber,” she wrote alongside the picture with the hashtag hyperbaric oxygen therapy. Carrie Ann also appeared to have a blanket and book beside her.

Last May, the 54-year-old TV personality revealed that she was trying hyperbaric oxygen chamber treatment for the first time. After her hour session was over, Carrie Ann shared that “it felt great” and she was “excited” about what it might do for her. “I get to do this for a while and see how it works, and I’ll keep you posted,” she added.

Since then Carrie Ann has kept fans in the loop about how she’s been feeling including when she left The Talk, began a new season of Dancing With the Stars and started her new online magazine Carrie Ann Conversations. But notably, this may be the first time that she’s revisited the topic of hyperbaric oxygen therapy.

Most recently in March she opened up undergoing treatment for Lyme disease. Carrie Ann has previously revealed details about her multiple autoimmune diseases and health issues, like lupus, Sjögren’s syndrome and fibromyalgia. Still, she’s optimistic about the progress she’s made. “I’m more well now than I’ve been in my life,” she told Yahoo! Life. “I’m so much more conscious now of what it takes to maintain wellness. It’s a daily practice every day I have to work on me ‘cause this is the gift.”