Peter Adams was 44 when he was told he had Stage 4 oesophageal cancer diagnosis that had spread to his lymph system.

Against all odds, he managed to beat the metastasis and had his stomach and part of my oesophagus removed two years later.

The chemo left him so ill with blood clots and sepsis that he could only complete four out of the planned six cycles. But he continued taking cancer drug Herceptin for three years.

Alongside the NHS treatment, Peter developed his own strict regime. This included an alkaline diet, hyperbaric oxygen therapy, infrared saunas, meditation and an array of supplements.

He said: “I am an inspiration to the doctors who have been managing my medical treatment and my success has been under-pinned by my own treatment protocols I have been running in parallel. They say that I am running my own race! Whilst this sounds good, it is totally unchartered territory.”

Last year the cancer spread to another lymph node but again, with conventional treatments and ramping up his own regime, Peter managed to defeat it once more.

“It’s still a mental battle, but feel I am winning it slowly. Although the cancer seemed to arrive promptly, it had likely been developing for years and I cannot expect its retreat to be quick in this respect.

“This cancer prompted me to reflect upon a lot of things, including myself, and look at ways I could empower myself to conquer this challenge. “

One decision Peter made was to write about his battle and all he learned along the way in the hope that it may help others in the same situation.

His book, called Tell Me Why..? is being published tomorrow (Wednesday) and is available on Amazon here. 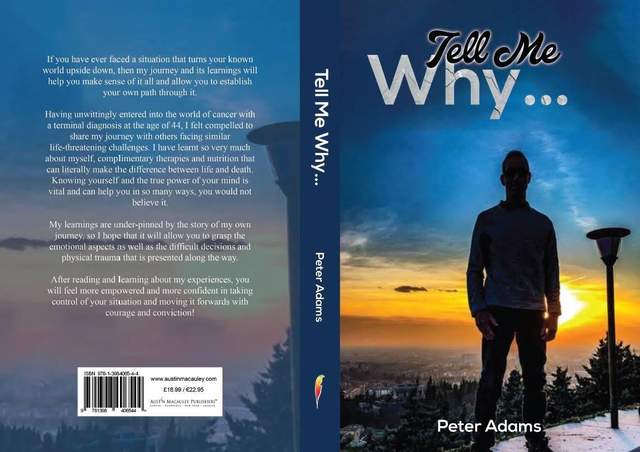