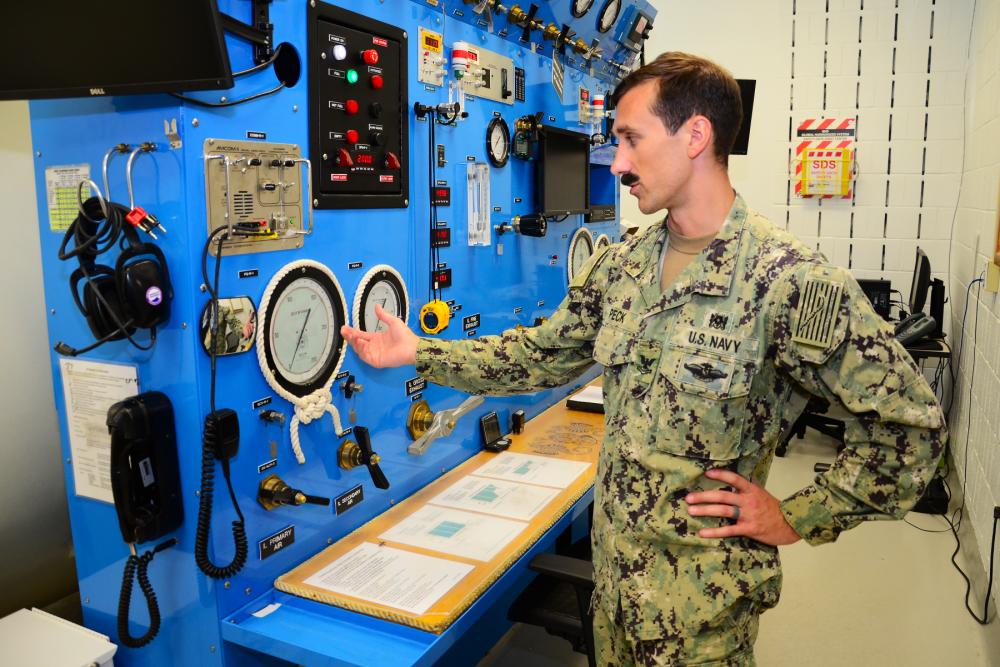 Photo By Joshua Cox | Hospital Corpsman 2nd Class Evan Peck, a member of the Naval Aerospace Medical Institute (NAMI) Hyperbaric Medicine team, points out the depth gauge of the recompression chamber on NAS Pensacola, June 14, 2022. The recompression chamber is used in hyperbaric medicine, and can treat many injuries and conditions with the patient receiving oxygen or oxygen blends while in the chamber. U.S. Navy photo by Joshua

In the Gulf Coast region, naval training missions and operations involving scuba diving are common, with many units and agencies frequently diving in the area.

Scuba diving can be extremely dangerous, and it’s possible for divers to develop adverse medical conditions and injuries while performing underwater operations. A common diving injury is decompression sickness (DCS), also referred to as the “bends.”

“Scientists figured out that the decompression sickness is caused by nitrogen bubbles coming out of solution in the bloodstream,” said Capt. Henry F. Casey III, M.D., department head, Naval Aerospace Medical Institute (NAMI) Hyperbaric Medicine Department. “If you spend time at depth, you actually onboard gases like nitrogen.”

After a diver reaches 99 feet, nitrogen becomes toxic and divers can literally become intoxicated while underwater.

Casey said many people die every year because they’re basically drunk under water after 99 feet and make tragic, unwise decisions.

Lt. Cmdr. Nolan Carter, the diving officer and hyperbaric nurse on the NAMI team, came up with the phrase “bubbles is troubles” to simply explain how decompression sickness develops in divers.

More than 100 years ago, divers who experienced so much pain that they couldn’t stand up straight after diving were said to have the bends — a signature symptom of decompression sickness.

“You have people come up and they can’t walk, and they sometimes are so bad, it looks like they have had a stroke” Casey said. “Really bad decompression sickness will kill you.”

Over the years, experts developed technology to treat the bends in scuba divers and others who experience pressure-related injuries.

“Scientists figured out how to build a chamber to pressurize that person back down to a depth where those bubbles go back into solution,” Casey said. “It’s a recompression chamber — we recompress people. It’s basically a Coke can on its side, and we pump air into it to bring it down to whatever depth we need to treat the patient”.

Recompression chambers in the fleet are mainly employed to treat the bends.

“The Navy decided to have these hyperbaric chambers placed where operational dives are,” Casey explained.

The NAMI Recompression Chamber on NAS Pensacola supports many units, agencies and activities in the area, including special operations commands, the Coast Guard and other units conducting diving, training and naval flight operations.

“On any given day, we’re probably supporting up to 500 people doing operational training or missions,” Casey said. “So, we’re on standby for that group of people.”

Casey said the recompression chamber can be used for naval aviators who need treatment. For example, if an aviator experiences a significant change in pressure during an altitude-related event in flight, they can develop decompression sickness and may need to utilize the NAMI recompression chamber and the experts who treat pressure-related injuries.

“Oxygen is the most important medication that we have,” Peck said. “There’s some dangers to the oxygen therapy when we put (patients) under pressure. But, the Navy has been working with this for a long time. We’ve got a lot of good research on it, and we’ve been one of the leading groups in the world.”

Casey said The NAMI Recompression Chamber is the only hyperbaric chamber in the Navy accredited by the civilian Undersea and Hyperbaric Medical Society (UHMS). The medical community relies on the UHMS for guidance on the safety and effectiveness of hyperbaric oxygen therapy for specific diseases and conditions.

“The idea is to bring people down to pressure, put them on oxygen and that oxygen gets absorbed into the body,” Casey explained. “Oxygen is a very healing substance. So, the hyperbaric oxygen therapy is great for wound care as well as DCS.”

The hyperbaric medicine team here can treat air or gas embolisms, bone infections, diabetic foot wounds and even certain types of poisonings. In all, the hyperbaric chamber on NAS Pensacola can treat 14 conditions and injuries in patients.

“We can put people in the chamber and we can flood them with oxygen, and that helps move that poison out,” Casey explained. “Sometimes there’s a blood clot that gets stuck in the eye and it will cause blindness,” he added. “But we can bring people here and treat that.”

Whether a Navy diver surfaces from the Gulf with the bends, or a DoD retiree needs treatment for a bone infection, the NAMI recompression chamber team is ready to support and treat patients with this extraordinary and innovative medical technology.