Can Hyperbaric Oxygen Heal Your Brain? 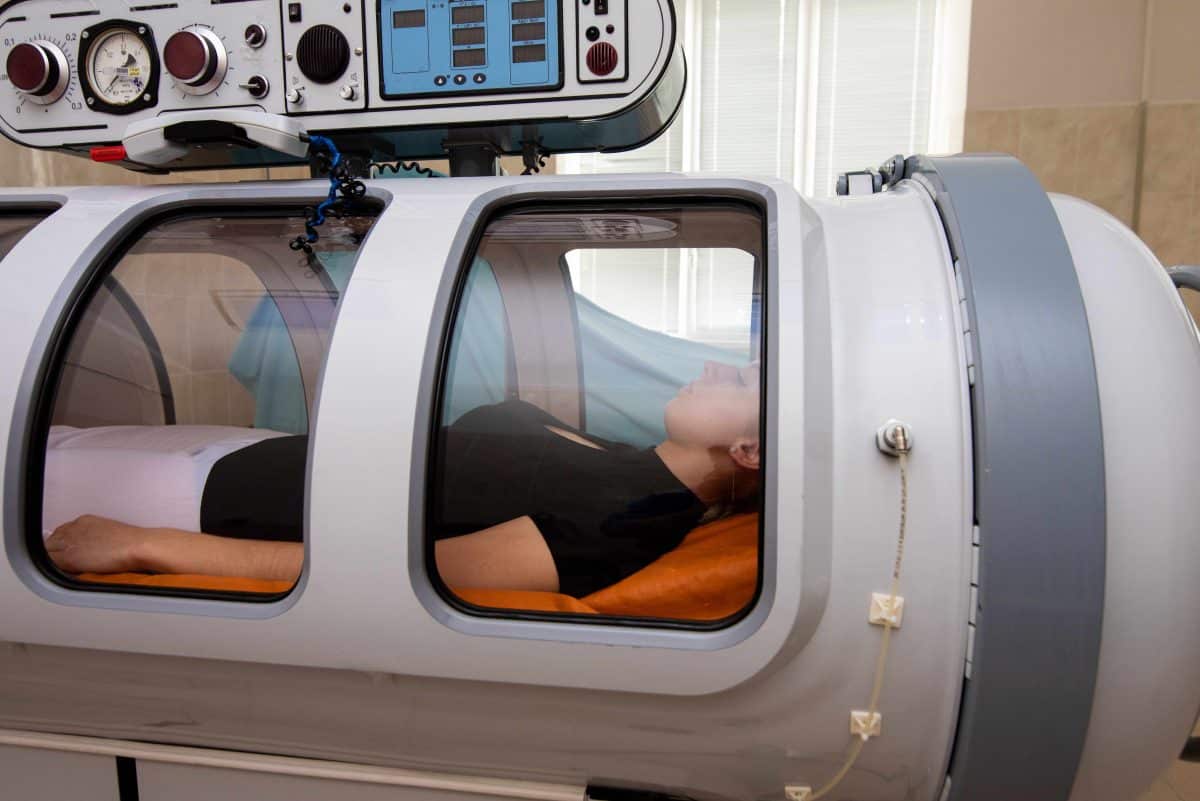 A new study shows promising results for this alternative treatment
BY JENNIFER MARGULIS
A recent systematic review published in the journal Frontiers in Neurology has found that hyperbaric oxygen may be a safe and effective treatment for mild brain injuries.

The review was conducted by Dr. Paul G. Harch, a clinical professor of medicine at Louisiana State University’s Emergency Medicine Residency Program in New Orleans. Harch is also an expert on hyperbaric oxygen therapy, according to his website.

The review examined the use of hyperbaric oxygen therapy to treat persistent post-concussion syndrome. This syndrome occurs when patients who have had concussions experience symptoms for at least three months.

According to the Mayo Clinic, post-concussion symptoms include, but are not limited to

The review included six randomized trials, one case-controlled study, one case series, and three case reports. All of the studies were small, involving fewer than 75 patients per study.

In analyzing the eleven studies, Harch found that using hyperbaric oxygen at 1 1/2 times the pressure of oxygen at sea level (which scientists refer to as “1.5 ATA oxygen”) significantly improved the symptoms of mild traumatic brain injury.

The amount of added pressure found to be effective was 50 percent greater than normal, about the same difference as going from a mountain town like Santa Fe, New Mexico, down to sea level.

Treatments at other oxygen levels had inconsistent results.

Despite the relatively small sample sizes, the studies included in the review had low levels of bias, leading Harch to conclude that there was strong evidence for the recommendation of using hyperbaric oxygen to treat persistent post-concussion mild traumatic brain injuries.

This study adds to a growing body of scientific evidence that suggests that hyperbaric oxygen therapy, or HBOT, may be helpful in treating a variety of ills.

What Is HBOT, Anyway?

Hyperbaric oxygen therapy is a treatment that allows patients to breathe pure oxygen at higher than normal pressure to help heal the brain and the body.

Most people don’t realize that the air we breathe normally is only about one-fifth oxygen (21 percent). The rest, some 78 percent, is nitrogen. The other one percent of our air is made up of other assorted gases, but the oxygen is the only part of the air that our bodies actually use.

So hyperbaric oxygen treatment gives patients access to air that is up to 100 percent oxygen. Then, to make this oxygen even more bioavailable, the treatment puts you under higher pressure than the surrounding air. Since your body is usually under less pressure, this pressure change forces more oxygen into your tissues.

In other words, HBOT turns you into an oxygen sponge.

Competitive athletes train at high elevations to expand their lung capacity and obtain better results when they’re flooded with the extra oxygen found at lower elevations where they compete. HBOT works in a similar way but goes further.

How Does HBOT Work?

In order to be treated with hyperbaric oxygen, you get inside a pressure chamber that can be sealed. These chambers come in a variety of sizes. If you’re worried you’ll feel claustrophobic, you may be able to opt for a bigger chamber.

The chamber is then sealed from the outside by a technician, and the pressure is raised gradually over time to the target level. You will likely experience popping in your ears as the pressure changes, as you would if you were driving down from the mountains or landing in an airplane.

At the same time the pressure is increasing, the normal air in the chamber is slowly changed to pure oxygen. Oxygen itself doesn’t smell any different from the mixed gases of normal air, so you likely won’t notice this change. As the chamber pressurizes, however, you hear a whoosh-whooshing sound.

You may be sitting or lying down, depending on the treatment facility. Larger health clinics have rooms to accommodate several people at once. In a hyperbaric oxygen room, a mask or hood will be placed over your nose and mouth during the treatment.

You stay in the high-pressure oxygen for anywhere from 15 minutes to no more than two hours. Then the pressure gradually comes down until you’re returned to the normal atmosphere. When you emerge from the chamber, your body is suffused with oxygen.

I’ve only tried hyperbaric oxygen therapy once. It was at a health conference where a vendor was selling chambers for in-home use. A friend and I went into it together. We were both nervous about doing it, to be honest. But we were reassured by the technician’s patient explanation and the fact that there was an emergency pull string on the inside of the chamber. He checked on us every ten minutes or so.

We both felt very relaxed and almost sleepy. Perhaps it was the calm inside the chamber. Once it was up to pressure we were in a bubble of quiet.

Or perhaps the sleepy feeling was because, even though outwardly we were relaxing, inside our bodies our mitochondria (the organelles inside our cells responsible for giving us energy) were hard at work. According to a 2018 article in the journal Federation of American Societies for Experimental Biology, mitochondrial mass is significantly increased after just one HBOT session.

What Ailments Can Hyperbaric Oxygen Treat?

For several ailments, hyperbaric oxygen is no longer considered a fringe or even an alternative therapy. It’s an established treatment in conventional medicine for carbon monoxide poisoning, decompression sickness experienced by divers, and to speed up healing time for burn victims.

Hyperbaric oxygen can also be beneficial for wound treatment, and in cases where an infection is deep inside inaccessible tissue, it can be flooded by the pressurized oxygen.

In 2017, Paul Harch and his colleague, Dr. Edward Fogarty, in the Department of Radiology at the University of North Dakota School of Medicine, published a case report in the journal Medical Gas Research showing they had used hyperbaric oxygen therapy to help a toddler who had suffered severe brain damage after falling into a pool. The toddler, Eden Carlson, was 23 months old and neurologically crippled: She could no longer speak, walk, or respond to simple commands.

As Eden Carlson’s mom told a CNN reporter, she was in the shower when her daughter slipped through the baby gate and fell into their swimming pool. She was face down in the pool for an unknown amount of time, perhaps as long as 15 minutes.

Paramedics gave Eden CPR for over an hour and a half before her heart started beating on its own.

Though they managed to save Eden’s life, the doctors told her mother the child would likely never walk, talk, or eat without a feeding tube, according to CNN. That’s when her mom turned to hyperbaric oxygen treatments. After multiple treatments spaced out over time, Eden had an almost complete reversal of the brain damage.

This dovetails with the experience of some parents of children with autism, who have seen improvements in cognitive function after treatment with hyperbaric oxygen.

While using HBOT for autism remains controversial, Harch treated his first patient with autism in 1995 and “has since seen noticeable improvements in 80 percent of autistic children who received HBOT,” according to his website.

In “The Autism Book,” California-based pediatrician Robert Sears touts HBOT as “one of the most effective advanced treatments” for children with autism, which can and should be individualized to the child’s needs.

At the same time, however, other allopathic doctors remain skeptical. For example, pediatrician Paul Offit, an attending physician in the Division of Infectious Diseases at Children’s Hospital of Philadelphia, author of “Autism’s False Prophets,” and an outspoken critic of vaccine-hesitant families, has called for caution. These doctors believe that hyperbaric oxygen therapy may be just another expensive but ineffective treatment held out to families desperate to find ways to help their children.

Should You Try It?

A conventional allopathic physician may recommend HBOT to you if you have severe anemia, persistent symptoms due to a concussion or another brain injury, diabetic ulcers that aren’t responding to treatment, gangrene, or another wound or infection that’s not healing.

Some recent research suggests that HBOT might help improve symptoms of Alzheimer’s disease.

Alternative practitioners may recommend trying it for diverse ailments, including shoulder injuries, infertility, hearing loss, and even chronic back pain.

As with many holistic treatments, the issue is often cost. While your insurance will cover treatments that are FDA approved (you can find a list of these on the FDA’s web page, “Hyperbaric Oxygen Therapy: Get the Facts”), you’ll likely have to pay out of pocket to treat a health issue that isn’t on the FDA’s list.

Amber Sims, a busy mom, wife, and PR and branding professional based in Portland, Oregon, tried HBOT when she was in agonizing pain after tearing her right rotator cuff. She avoided the emergency room because she felt that the doctors there would just prescribe her opioids, run a scan, put her arm in a sling, and likely recommend surgery. Instead, her husband drove her to an HBOT clinic across the river from her chiropractor’s office the morning after the injury.

“I’d known about it for a long time,” Sims says. “But it’s expensive, so I never tried it.”

But Sims had a small child to care for and a full-time job, so paying out of pocket for HBOT finally seemed worth it.

“Anything I could possibly do to expedite healing felt like it was worth a try. By the end of the first session, I could tell this was going to make a difference,” Sims said. “There’s a reason why so many professional athletes use it for injury recovery.”

And she was right. After just two HBOT sessions, combined with some other healing techniques (laser therapy and a levy protocol to allow her arm to be mobilized a few times a day to avoid frozen shoulder), Sims reports she was almost completely healed.

“The oxygen was incredibly helpful,” she said. “It gave the healing process the upper hand and helped give my body what it needed to heal itself.”

Article cited by The Epoch Times