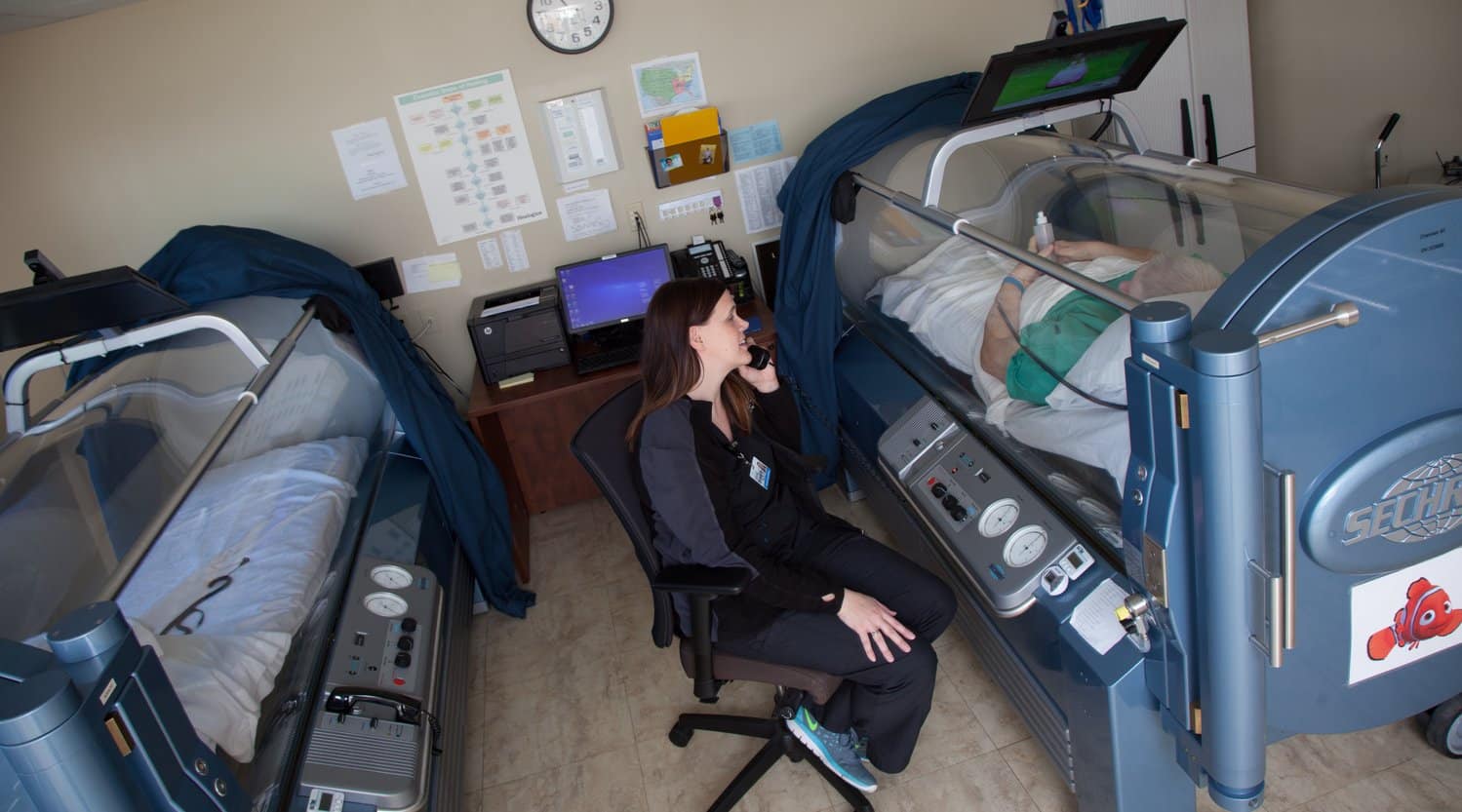 A Bothwell patient undergoes treatment in one of two hyperbaric oxygen chambers at Bothwell Wound Healing Center. Patients are exposed to pure oxygen to improve blood flow and promote healing.

Hyperbaric oxygen therapy is a mouthful of words that can make a head tilt in confusion. Perhaps most associated with scuba diving as a treatment for deep-water divers to avoid decompression sickness, known as “the bends,” the therapy can also be used to treat a variety of other health problems like chronic wounds. A chronic wound is a wound that doesn’t heal within five to eight weeks, which can lead to infection, illness or even the loss of a limb.

Such was the case for Pam Harris, of Sedalia, who broke four toes in late 2020. On a visit to Bothwell Wound Healing Center for a different injury, Nurse Practitioner Gail Meyer noticed her toe injury and referred her to orthopedic surgeon Dr. Evan Stout at Bothwell Orthopedics & Sports Medicine, who x-rayed her foot.

“They were definitely broken and painful,” Harris said. “I wore a short boot and while they were healing, air was not getting between them, and I ended up developing a wound between my pinkie toe and the next toe.”

Meyer began treating Harris for the toe wound using traditional wound treatments, but it reached a point that without more intervention, she was at risk of losing both toes. That’s when Meyer recommended Harris undergo hyperbaric oxygen therapy.

“The air pressure inside is raised to a level that is higher than normal air pressure,” she said. “The increased air pressure in the chamber helps the lungs collect more oxygen. Getting more oxygen to the tissues that need it can help the body heal and fight certain infections.”

The number of treatments varies depending on the patient’s diagnosis but it is usually 30. Patients lie in the chamber for two to two and half hours while oxygen circulates.

“I didn’t know anything about oxygen therapy before I did it,” Harris said. “It took me a few times to get used to being in a confined space, but they (the staff) don’t leave your side. We could talk to each other and I was able to watch television, too.”

“We most commonly see diabetic lower extremity wounds, delayed radiation injuries and bone infections that don’t heal properly,” she said. “But we can also treat crush injuries, bacterial infections, carbon monoxide poisoning and many others. Oxygen therapy also causes the formation of new blood vessels in a process called angiogenesis that supports and promotes healing. It’s a treatment that has been proven to help you heal better and faster.”

Harris credits the Wound Healing Center team with saving her toes from amputation.

“Theresa is the person who was with me during most of my oxygen therapy,” Harris said. “She was excellent and really knew her stuff. I would trust her with anything. I had to do the maximum number of treatments, but it saved my toes. It worked fantastically.”