In a first for a state government hospital, Victoria gets hyperbaric oxygen unit 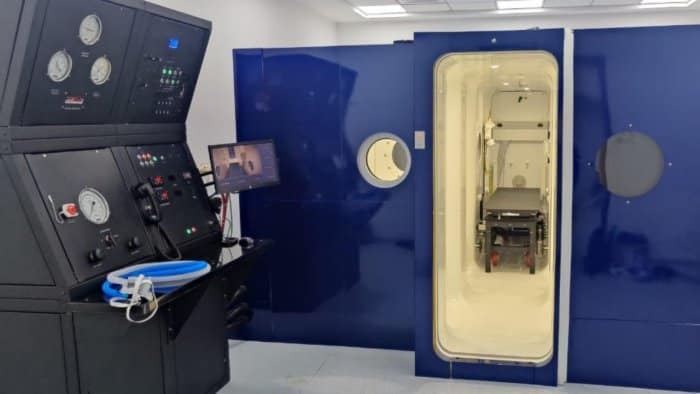 In a first for a government medical centre in Karnataka, Victoria Hospital got a hyperbaric oxygen therapy unit on Tuesday. The unit has been set up at a cost of Rs 3.5 crore.

The therapy also works during Covid-19 treatment and black fungus treatment. In the elderly, it works for blindness, deafness, erectile dysfunction and for anaemia.

What is hyperbaric oxygen therapy?

Hyperbaric oxygen is provided by subjecting the patient to higher pressures (up to three times the normal atmospheric pressure at sea level) while they breathe 93 per cent and above medical grade oxygen. In a hyperbaric chamber, patients breathe 100 per cent oxygen.

What does Hyperbaric oxygen do?

A higher amount of oxygen dissolves in plasma, that is, the fluid portion of the blood, lymphatic fluids, etc, thereby reducing the dependency of red blood cell transport for delivering oxygen to the tissues.

This then leads to the recovery of muscle or brain function depending on how long after the initial injury the treatment is provided.The increased pressure that the patient is subjected to leads to a reduction in inflammation or oedema build-up leading to higher delivery of nutrients so that damaged tissues or organs will heal. Hyperbaric oxygen therapy has proven to facilitate a higher rate of stem cell stabilisation leading to the regeneration of cells and tissue.