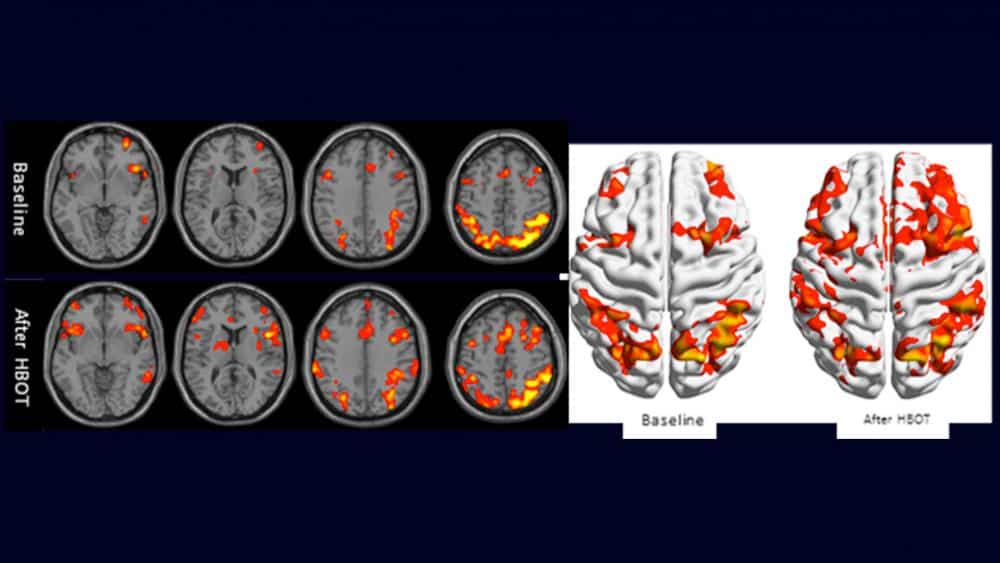 Clinical example of functional brain imaging by fMRI. The reduced brain activity in the frontal lobes of the brain and in hippocampus is improved after Hyperbaric Oxygen Therapy . Credit: Shamir Medical Center

Israeli scientists have found that hyperbaric oxygen therapy (HBOT) can significantly relieve the symptoms of those who suffer from post-traumatic stress disorder (PTSD).

A study conducted by researchers from Tel Aviv University and the Shamir Medical Center on 35 veterans from the Israel Defense Forces found that new HBOT protocols reduce symptoms in those that suffer from treatment-resistant PTSD, demonstrating significant improvement in all classes of symptoms.

The peer-reviewed study was published earlier this week in the prestigious scientific journal PlosOne.

While there have been studies on the effects of oxygen therapy on PTSD patients who also suffered from traumatic brain injury, this is the first time researchers have focused on using oxygen therapy to treat patients only suffering from psychological trauma, Dr. Keren Doenyas-Barak, one of the researchers that led the study, tells NoCamels.

PTSD is a disorder that develops in some people who have experienced a shocking, scary, or dangerous event. While it is natural to feel afraid during and after a traumatic situation, fear can also trigger many split-second changes in the body and brain to help defend against danger or to avoid it.

“I would sit with some of these patients and I would get such a strong reaction,” says Dr. Doenyas-Barak, “Like when you look at a dog, you can tell if he’s calm or very stressed or afraid. And for these patients, the disease is actually in their limbic system. So you can actually tell if they’re looking around or if they’re calm. There were certain days when you could feel that they were lost. There was a need [for these veterans] to look around for danger.”

Dealing with daily life was a struggle, she tells NoCamels. They would get scared hearing loud noises or when airplanes flew above their head. Some couldn’t stand in line to order food because they were worried about who was behind them.

“It was very clear when they were not in their comfort zone to someone who sat with them. They couldn’t sit with their back to a door. It was very dramatic.”

Hyperbaric oxygen therapy has been used as a type of treatment to speed up healing of carbon monoxide poisoning, gangrene, stubborn wounds, diabetic skin wounds, and infections in which tissues are starved for oxygen, among others. During the treatment, a patient breathes in pure, high-pressure oxygen at various concentrations through a mask while seated in a hyperbaric (pressurized) chamber to stimulate the healing process.

Efrati’s team at Shamir Medical Center’s Sagol Center for Hyperbaric Medicine and Research has done extensive research on the use of HBOT to improve brain function in patients that suffer from stroke, fibromyalgia, and Alzheimer’s. In one contentious 2020 study, Efrati even claimed that HBOT has the potential to “reverse” aging at the cellular level.

“Today we understand that treatment-resistant PTSD is caused by a biological wound in brain tissues, which obstructs attempts at psychological and psychiatric treatments,” said Prof. Shai Efrati in a statement, “With the new HBOT protocols, we can activate mechanisms that repair the wounded brain tissue. The treatment induces reactivation and proliferation of stem cells, as well as generation of new blood vessels and increased brain activity, ultimately restoring the functionality of the wounded tissues. Our study paves the way to a better understanding of the connection between mind and body.”

The study included 35 combat veterans with a mean age of 32 years old who had undergone treatment for PTSD but had been resistant to both psychiatric medications and psychotherapy. The veterans were divided into two groups where one served as a control group and one received HBOT. The group of 18 veterans that received HBOT went through a course of 60 daily sessions in the hyperbaric chamber for about three months.

PTSD symptoms reduced sharply, the researchers said, with specific improvement in hyper-arousal, avoidance, and depression. These were caused or related to specific improvements in biological factors, like changes in brain activity and heart rate, which have been identified as effects of PTSD.

“Oxygen is the basic source of energy production. We must have oxygen in order to generate energy. Generally, the brain doesn’t work 100 percent when it lacks oxygen. We have two main vessels bringing blood to the brain and only certain parts of the brain are active when we don’t have enough energy for the rest. So these hypometabolized brain regions cannot heal if they don’t have enough energy,” says Dr. Doenyas-Barak, comparing it to someone putting a pillow against someone’s face so that they could not breathe, signaling a need for a healing response. “We could also demonstrate changes in the activity of certain brain regions such as the prefrontal cortex and the hippocampus, and improved connectivity. There was a very good correlation between the changes in the clinical score [of our patients] and the activity in certain brain regions.”

One of the things Dr. Doenyas-Barak said the soldiers complained about was hot flashes and sweat. When they were fearful, the sweat had a sour smell that was not pleasant. After the HBOT treatment, “one of the soldiers described to me how he had many undershirts in his car, which would be there because he had to change his shirt a few times a day because it got smelly. He had to get to his car, change the shirt, and get back to work. One day he realized that there were many shirts accumulating in his car. Suddenly he didn’t need to change them anymore, even when he was nervous.”

Other soldiers reported unique changes in their quality of life, Dr. Doenyas-Barak explains. One said the neighbor’s dog, which would always bark at him, suddenly stopped barking. Another said that for the first time, he could use a touch screen in a McDonald’s restaurant without paying attention to who was behind him.

Our results indicate that exposure to severe emotional trauma can cause organic damage to the brain,” says Prof. Efrati. “We also demonstrate for the first time that direct biological treatment of brain tissues can serve as a tool for helping PTSD patients. Moreover, our findings may be most significant for diagnosis. To date, no effective diagnostic method has been developed and diagnosis of PTSD is still based on personal reports which are necessarily subjective – leading to many clashes between the suffering veterans and the authorities responsible for treating them,” said Efrati, “At present, we are conducting continuing research in order to identify the biological fingerprint of PTSD, which can ultimately enable the development of innovative objective diagnostic tools.”

“We believe that in most patients, improvements will be preserved for years after the completion of the treatment,” added Dr. Doenyas-Barak, “This study gives real hope to PTSD sufferers. For the first time in years the study’s participants, most of whom had suffered from severe PTSD, were able to leave the horrors behind and look forward to a better future.”