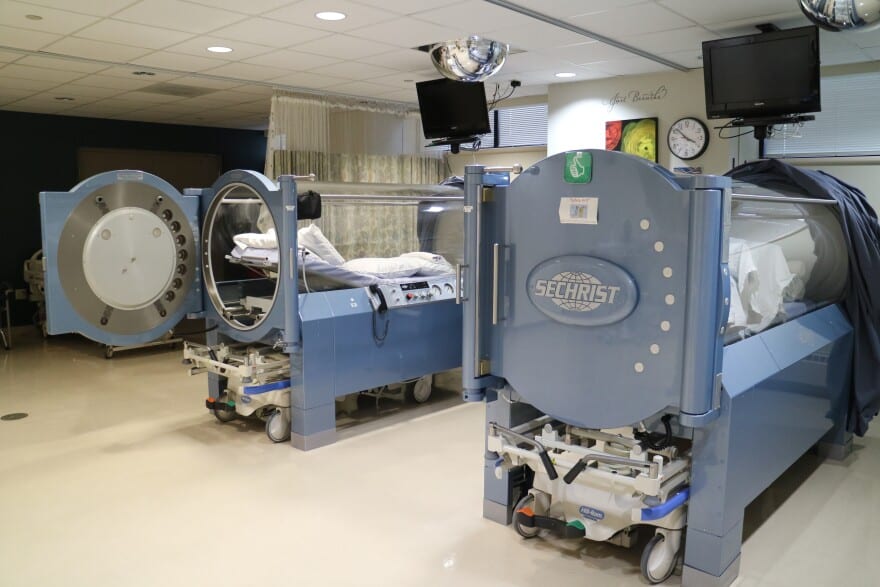 The Center for Wound Healing at Carle BroMenn Medical Center uses hyperbaric oxygen therapy as one of its treatment methods.

We all get cuts and scrapes, but for a lot of people, those injuries may not heal. And the longer a wound stays open, the higher the risk of infection. More than eight million people in the U.S. suffer chronic wounds each year, costing $98 billion a year to treat.

In Bloomington-Normal, between 300 and 500 people each month are treated for wounds that won’t go away. Dr. Caroline Halperin, medical director of the The Center for Wound Healing and Hyperbaric Medicine at Carle BroMenn Medical Center, said one in four families in the nation has a member with a chronic wound, noting there has been a steep rise in amputations in the country.

She said the skin is the biggest organ in the body and when you have a chronic wound, it’s a sign of poor life expectancy.

“The problem is growing because of our aging population, as well as our diabetic patient,” said Halperin on a new installment of Sound Ideas. “About 2% of our population continues to have wounds. There’s several different types of wounds. The most common is diabetic ulcers, but there’s also venous ulcers, pressure ulcers, lymphedema, and surgical wounds.

She said it can be very hard for patients who come in because they have had wounds for a year.

Diabetic ulcers and pressure ulcers from immobility, commonly known as bed sores, are more common. Venous ulcers can be quite painful. When you have a problem with the venous return of blood to the body, you get swelling, causing the skin to stretch and resulting in less perfusion to the skin, resulting in an ulcer. Arterial ulcers have to do with decreased blood flow, to the legs usually, also because you have poor perfusion of oxygen to the tissue. The tissue is a live organ, and it requires oxygenation to live, said Halperin.

Older people, people that have diabetes, smokers, and people with poor nutrition, are all more likely to have an ulcer.

Halperin said it is possible to prevent some wounds.

“If you’re diabetic, the best thing to do is control your blood sugar (and) to make sure you eat properly. The other thing is if you have venous stasis, using compression, that helps with decreasing the swelling. If you have vascular compromised or poor blood flow, treat that,” said Halperin.

The wound center at Carle BroMenn treats ulcers in several ways: debridement or cleaning out dead tissue and bacterial mats that can keep the wound inflamed even if they do not cause infection, specialized dressings, bio-engineered skin, and hyperbaric oxygen.

If a patient has good blood flow, the center cleans out the dead tissue and makes sure there is no infection. Usually at that point they use a special dressing, perhaps collagen.

“We need to continue to help with the biofilm, which is when the bacteria sits on the wound, causing inflammation, but not really infecting the wound. After about four weeks, most of the time, we can use a bio-engineered skin. The ones we use here range from xenografts, which come from animal tissue, to allografts, which are human tissue,” said Halperin.

Also in the tool kit at the Center for Wound Healing is hyperbaric oxygen therapy. Patients sit in a closed chamber exposed to an atmosphere of 100% oxygen. Normal air is about 21% oxygen. The oxygen also is at 2 to 2.5 times the normal atmospheric pressure. Treatments take one to two hours, and a course of treatment is daily for about a week.

“It increases the plasma level of oxygen, which results in angiogenesis, which is a production of new blood cells. It helps with tissue repair and death of cells, and helps with infection,” said Halperin, adding the center’s heal rate is 93% to 95%.