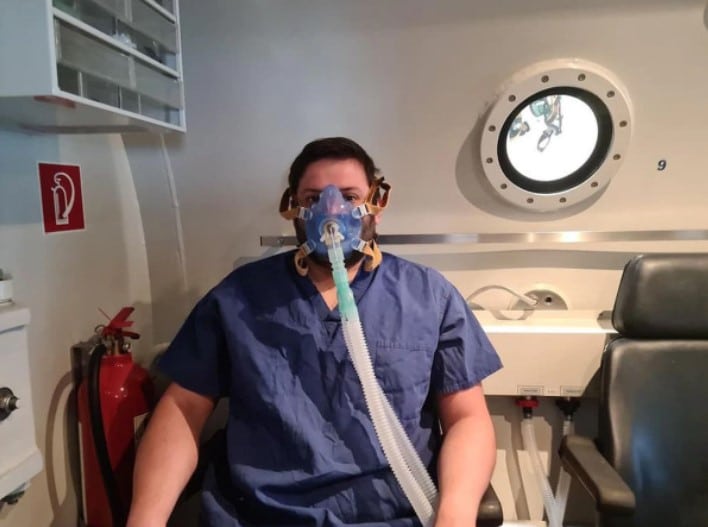 Staff members have been given access to hyperbaric oxygen therapy at the Midlands Diving Chamber in Rugby, visiting the facility for 90-minute sessions once a day for three weeks.

During the therapy, patients are seated in a specialist six-metre-long chamber in which the pressure is raised – to the equivalent of 14 metres below sea level – before they breathe in oxygen via a mask.

The higher pressure means more oxygen gets into the blood and to cells that need repair.

Assistant chief fire officer, Simon Barry, said: “We’re incredibly proud of how everyone at West Midlands Fire Service has responded to meet the challenges of Covid-19.

“We have prioritised the health and wellbeing of our staff throughout. This has enabled them to keep delivering our core services as well as provide a wide range of additional support for the most vulnerable members of our communities.

“As we all transition to living with Covid, the health and wellbeing of our staff remains an absolute priority. Several of our staff have had severe, longer-lasting Covid symptoms.

“We’re delighted to have been able to offer them the hyperbaric oxygen therapy, and it’s great to see many of them responding so well.”

“The anti-inflammatory effects of hyperbaric oxygen therapy can counter the increased inflammation and neuro-inflammation common to Covid-19 and reverse the oxygen debt on a cellular level.

“Oxygen delivered in this way can not only address someone’s low oxygen levels but the effects this can have on their tissues.

“In the cases that we have seen, some of the more common symptoms such as fatigue, ‘brain fog’, insomnia and neurological problems respond extremely well to the therapy.

“Most of the patients who have Long Covid see significant improvement after only ten to fifteen sessions in the hyperbaric chamber, with some of them getting completely back to normal.”

Phil King has been a firefighter with West Midlands Fire Service for nearly 25 years.

He is based at Wolverhampton Fire Station and contracted Covid in April 2021.

He was rushed to hospital with a suspected stroke, which was later ruled out after tests. But the following months saw Phil experience symptoms including blood pressure spikes, palpitations, dizziness and ‘brain fog’, as well as gastro-intestinal problems.

Phil said: “It also affected me mentally. I often thought I was dying. So many tests came back negative that it felt like the doctors didn’t believe me or had run out of ideas. The only treatment they offered was blood pressure tablets.

“After months of feeling so ill and not knowing why, being able to have the hyperbaric oxygen therapy really helped both physically and mentally.

“To start with, it was a bit weird going into the chamber, but I soon felt comfortable with it. The staff were very nice and helpful. They explained the process and how it works.”

Phil says that the treatment got rid of many of his symptoms and lessened others.

“Having the treatment in November gave me the confidence to socialise a little at Christmas. Although I still had some symptoms, I finally felt positive about getting back to normal.

“Unfortunately, I caught Covid again in January and it knocked me back a bit. I’ve been back to the chamber for more treatment and am still feeling positive about the future.”

Lisa Slevin, a crew commander with the Fire Safety team, said: “I honestly don’t know what I’d have done without it, or even whether I could have returned to work.

“After week three – wow – all my symptoms had gone. I was back running, in the gym, swimming and the stairs were no longer an issue.

“The difference between pre- and post-treatment cognitive tests was astonishing. It suddenly became clear why I’d been feeling like a zombie.

“I’m now back at work and will hopefully be back up to full duties by May. It has been a long journey, but I honestly don’t think this would have been possible without the chamber sessions.”