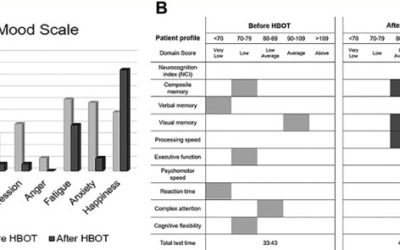 Returning veterans are frequently diagnosed with traumatic brain injury (TBI) and post-traumatic stress disorder (PTSD). Considering a recent case-controlled study of hyperbaric oxygen therapy (HBOT) reporting a reduction in suicidal ideation, we investigated retrospectively three veterans with chronic TBI/PTSD symptoms who were treated with multiple rounds of HBOT with neurophysiological testing performed before and after treatment. Improvements were detected on parameters within neurocognitive domains, including reductions in suicide-related symptoms. These findings independently confirm that HBOT may be effective in treating specific symptoms of TBI/PTSD that are not currently addressed with existing therapeutic approaches.

END_OF_DOCUMENT_TOKEN_TO_BE_REPLACED

Traumatic brain injury (TBI) describes the presence of physical damage to the brain as a consequence of an insult and frequently possesses psychological and neurological symptoms depending on the severity of the injury. The recent increased military presence of US troops in Iraq and Afghanistan has coincided with greater use of improvised exploding devices, resulting in many returning soldiers suffering from some degree of TBI. A biphasic response is observed which is first directly injury-related, and second due to hypoxia, increased oxidative stress, and inflammation. A proportion of the returning soldiers also suffer from post-traumatic stress disorder (PTSD), and in some cases, this may be a consequence of TBI.